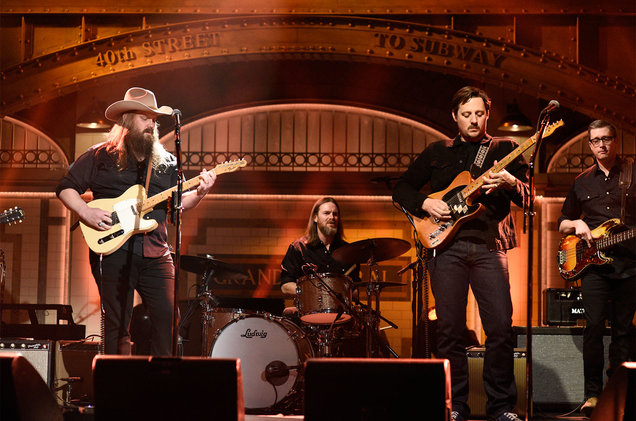 Two of the genre’s very best joined forces for the first time in public performance and set pockets of the industry on fire and country fans in a frenzy. Chris Stapleton was scheduled to play SNL and quietly teased his fellow Kentuckian, Sturgill Simpson would be joining him. With Stapleton releasing two albums this year, and Simpson getting back to his rock n roll roots, the climate lent the perfect setting for a public union. Simpson, an unannounced guest for the first song, played mostly back up guitar, but did get to share a verse singing in his slow, deep, mumbled growl.

The pair played two cuts from Stapleton’s records, From A Room. The “A Room” of course, refers to the A Room at RCA studios in Nashville owned by Dave Cobb, who has produced all of Stapleton’s solo material, two Sturgill records and the last 3 Jason Isbell records. Those 3 men are known as either the saviors or badass outlaws of the country music industry, depending on who you talk to.

Naturally, with Simpson and Stapleton teaming up for one night, rumors and hopes of a Highway Men 2.0 sprouted almost immediately. People clamor for the days of yesteryear and equally complain about the state of pop country radio music. Simpson, Isbell, Stapleton, Margo Price and a few others have risen to the top doing it their way, much like Merle, Willie, Kristofferson and Johnny Cash did. Whether V2.0 ever actually happens or not, legions of country music fans are already lined up to follow them around the country.

JON McKIEL “Bobby Joe Hope.” Whether it’s the first thing you hear with the light poking through the blinds or in the early evening as satisfaction sets in for a day well spent. On point. Spring finally sprung in Seattle and this record been getting lotta spins. #JonMcKiel #bobbyjoehope