Seattle’s experimental, electronic RnB singer Shaprece plays her first hometown headlining show in a long time on Thursday, November 20th at the Columbia City Theater with Budo and Theoretics. She released an EP Molting (listen here) in July and has stayed very busy since. She just got back from New York doing a string of shows, she’s prepping for a TED Talk at McCaw Hall and finishing a new album. If the album is anything like Molting, she won’t be slowing down anytime soon. She was kind enough to take a few minutes over the weekend to discuss the show and what to look out for in the future. 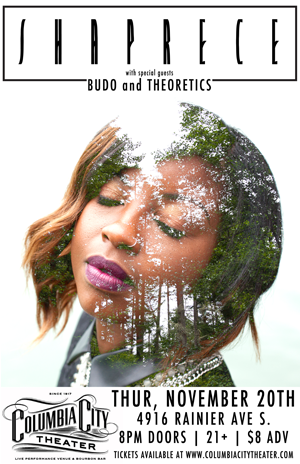 Old Rookie: you have a headlining show coming up on Thursday at Columbia city Theater, I thought it would be a good opportunity as a fan of yours to shed some light on it.

Shaprece: Thank you! All the help we can get with that is great. I really appreciate it.

OR: Happy to. You did a session with KCBS FM in Bellevue on Friday, how did that go?

S: It went great! We actually pre-recorded it because I had an event to do, so we did it on Thursday night. But it went great. He played a song from 2011, the EP Scatterbrain that I put out, so I kind of got to go down memory lane a little bit.

OR: You also did a KEXP session a week or so ago, sounded great. Was that your first time?

S: Thank you. No, I did Street Sounds with Larry Mizell Jr back when we were promoting Scatterbrain as well, but that was my first time with Brandon and Phillip.

OR: Seattle seems to embrace all of their artists, where do you think you fit in? All the artists seem to support each other and it seems like a unique scene here.

Shaprece: Shaprece: Yeah, absolutely. Especially for me because I have collaborated with a lot of very talented artists, particularly in the hip hop genre. There has definitely been a huge amount of support. We’ve all worked together in one way or another, so we all support each other as much as we can.

OR: There is some great talent in Budo and Theoretics supporting you for your show Thursday. Have you played there before?

S: Yeah I have! I was a part of a soul festival there a few years back and I just remember loving the sound of the venue. I definitely wanted to have a theater-vibe with all the strings and instrumentation we’re going to have on Thursday, so I’m excited to play there again.

OR: I saw you at Capitol Hill Block Party at Neumos .The electronic instruments and the strings just vibe so well. It’s a full sonic experience.

S: Thank you. Yeah, 2 things that I love.  Definitely experimental, us trying to blend the two, but I think it’s going well.

OR: You were in NY for the CMJ festival. Was that a solo gig or were you able to bring some of the band with you?

S: Phillip and Branden (IG88), came with. Phillip plays cello and Branden does most of the production. So the 3 of us headed east and it was really fun and memorable. I’m a big fan of New York! Not somewhere that I would necessarily choose to live because I am true Pacific Northwest girl, but it was really interesting and it seemed that the sound went well there. I think we’ll have a market on the east coast…People really seemed to dig what we were doing there. We’ve already been invited back to play a venue in Manhattan, and may be heading back as early as January. Aside from the shows, I ate an abundance of pizza which I at no time felt bad about 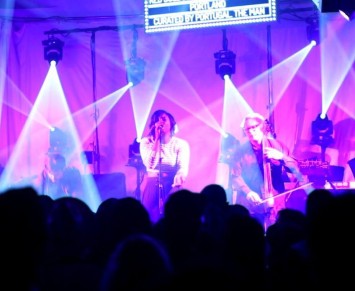 S: The name of the venue slipped my mind at the moment, all I know is that it’s in Manhattan. We did a show with So Far Sounds at the llegal Mezcal headquaters and I think someone from the venue was there, heard our set and asked us to come back. We’re working on some New York shows as we speak.

OR: Wishing you luck. After the Seattle show, you’re going to Bellingham and Portland, any more plans to tour in 2015?

OR: Are some of the songs from Molting Ep going to be on the album or is it entirely new?

S: It’s entirely new. It’s going great actually. Were seriously like 98% finished. It’s really really close to being finished. Were just polishing it up and working on transition pieces and trying to make it a cohesive, overall body of work. That final 2% can be the most stressful sometimes though. We’re getting  there.

OR: Staying busy! You have a TED Talk (TEDxRainier) coming up too, are you all prepared for that?

S: Yeah, I had my final meeting with them to go over the idea I have. I feel really comfortable about what my speech is about. Plus, I’m doing songs as well. It’s a short speech in between a small set of songs so I’m really excited about it. I’m thrilled they asked to me to be a part of it because I love watching Ted talks so when I got the invite, I was floored. Like, “really, me? How’d that happen?”

OR: TED talks will get you fired up afterwards, pretty inspiring stuff.

S: Yeah, you’re ready to take on the world afterwards

OR: Kind of off topic, but your mom got to sing the national anthem for the Seahawks a few weeks ago. Singing family.

S: Yeah! She’s a two time breast cancer survivor and the Seahawks chose her organization, Cierra Sisters, to be their organization of choice to recognize and help raise breast cancer awareness. They donated $15,000 to help with community outreach and research, and also asked her to sing the national anthem! Long story short, singing does indeed run in the family. My dad is a musician and my mom sings in church and pretty much whenever the opportunity presents itself. She has an ear for it, as do my sisters. Between being influenced by all of them, and going to a pretty musical school, I guess you can say that’s where it all started from. 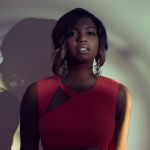