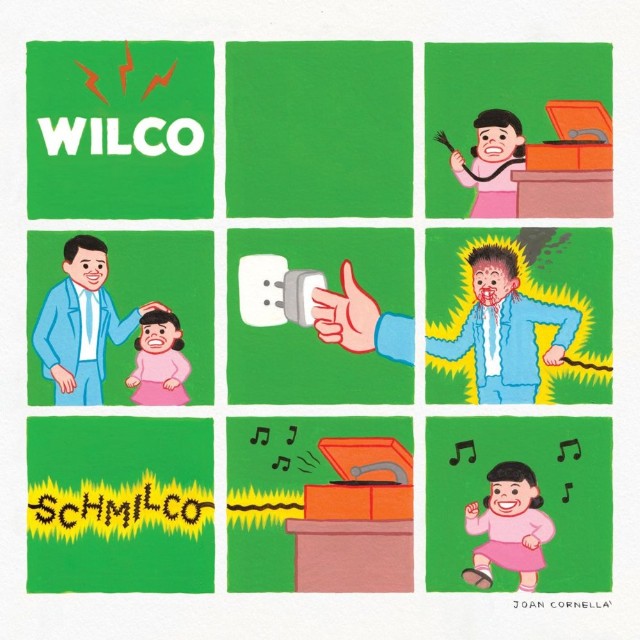 On the surface, Wilco’s Schmilco seems like either an ode to Harry Nilsson or a self-aware, self-deprecating dad-joke of the band’s reputation as dad-rockers. After getting lost in the Scmilc, it appears to be neither. Though the cover art’s bright colors and cartoon graphics suggest a record full of goofy sing-alongs or just Wilco playing it cool, that is not necessarily the case either. The album is fairly dark and mellow. It is easy listening, but when you dive into the content, it is a bit of mind trip.

Colored vinyl and record store listening parties around the country set the tone for a celebration, but upon hearing Schmilco, you may question the mood of Wilco. The entire record seems to contradict itself, but in a way, both sides of the Wilco-coin are true. The band may not take themselves too seriously, but it’s clear they take their art seriously.

The album starts with Normal American Kids, which seems… normal, but you find out it’s about a youthful Jeff Tweedy hating said American kids and not fitting in with them or their bongs and carpeted vans. The third track, Cry All Day is about just that. Even the song titled Hapiness is about sadness. Nearly all of the 12 tracks share a similar tone, but despite it, Schmilco comes out as a fun time.

Where last years’ Star Wars was slightly experimental and noisey, Schmilco is mostly acoustic and smooth. The songs were written and recorded during the same sessions, but were smartly split into two separate albums. Though there are definite similarities in sound and style, dividing the material was a good move and makes for easier digestion. Schmilco’s softer flavor sheds more light on Jeff Tweedy’s songwriting. Both records are just over 33 minutes, and the only real reminder of Star Wars, is the rocking 9th track Locator.

“Schmilco” as the record title is hard to take seriously, but it appears to be just as arbitrary as “Star Wars.” Both records possess an intrigue that Wilco has deservedly built over the last decade. It seems that that happy, electric, sad or acoustic, they find a way to freshen themselves and stir the pot at the same time.

Listen to Schmilco via spotify

If I Ever Was A Child