Last July I was scrolling through the mindless blur that is the Facebook feed, and something refreshingly worthwhile caught my attention; it was a long status from Cherry Glazerr, and it expressed frontwoman Clementine Creevy’s deep frustration with the onslaught of sexism she and her bandmates experience consistently within the music industry. Even after being touring musicians for years, they have been disrespected, mocked, and treated like amateurs countless times: “We’re ignored, hated. It feels so awful when the stage manager looks at us and scoffs, looks the other way when we come in through the door. They ask us what we’re doing here, why are we here? Who are we? We’re the band that you hired… then they accuse us of being difficult, just for existing it seems.” (To read the full status click here) Creevy writes with an eloquence that extends beyond age and gender, and that points out what humans deserve at the base level: to be respected and treated decently by other humans.

Creevy taps into these feelings of anger and confusion in Cherry Glazerr’s latest album, Stuffed and Ready, released on Secretly Canadian. It’s been clear throughout her career that she is not afraid to stand up for herself and speak about important issues, even if they resonate in a raw way, but Stuffed and Ready takes her emotional, artistic, and musical expression to the next level. 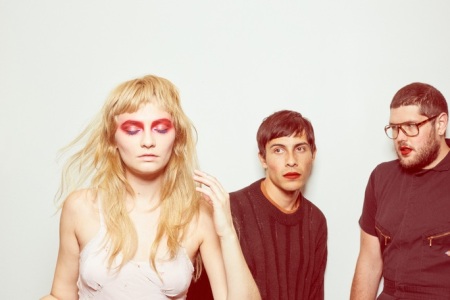 While Creevy has always been one to sing about what she knows and feels, the band has evolved dramatically from its debut LP Papa Cremp. That first release was whimsical, with a fuzz-pop sound and fun songs such as Cat Sitting in My Room, and Grilled Cheese. However, one song on that album began to scratch the surface of weightier subject matter; in the track Teenage Girl, Creevy sings “Milkshakes and cat eyes/Lipstick and french fries/Internalize so much but so little/Don’t make us feel belittled world.” This song lists seemingly harmless, girly things that many young people enjoy, but then notes how these small things can be internalized in a big way because of how society corners girls (and boys) into fulfilling a certain role.

Years later, not only have the bandmates changed, with Creevy being the only anchoring member, but the way the music has evolved is a clear indication of Creevy maturing as an artist and as a woman existing in our culture. Cherry Glazerr’s discography is a beautiful homage to a girl growing up and grappling with the intensity of our social climate, and her place within it. She begins to explore this through Apocolipstick, released when Trump was inagurated in 2017; in this album Creevy focuses more on external issues as a way to grapple with her anger and frustration.

In Stuffed and Ready, the lens turns inward; the album immediately starts out with an edgier, darker tone than the band’s previous music. Ohio brings us into the album hearing shredding guitars with a synthy, grungy, psych sound. Creevy sings, “When you move on there’s no ground beneath you” and ends the song by calling out, almost eerily “Just take me away” over and over, building a feeling of chaos through her sound and lyrics.

Next track on the album is Daddi, one of the album’s singles. This song seems to be jumping off the sentiment of feeling belittled as a young woman that Creevy began to explore in Teenage Girl years ago; it delves straight into the issue of gender hierarchy, women feeling like they have to ask men for permission, and men feeling entitled to women’s lives and bodies. “Who should I fuck Daddi, is it you?” and “Where should I go Daddi?/ What should I say?/ Is it ok with you?/ Is it ok to play?” This song is a brilliant blend of cheeky satire and disturbing realness, touching on a wider societal issue of controlling men/fathers/the patriarchy, while also perhaps speaking to some of Creevy’s personal experiences. She slows down for the bridge, singing “Smoking makes me taste like metal/ To keep you away,” leaving the listener feeling a slow, creeping itch under their skin. Whether or not the song is a metaphor or is an expression of actual experiences, it portrays its message explicitly, fearlessly, and firmly. “Don’t hold my hand.”

A strategically placed Wasted Nun follows Daddi; another powerful banger, this song keeps up the intensity that has begun to build as the album progresses. The song seems to be an emotional response to the feelings that come up in Daddi. Creevy touches on a feeling of recklessness, of being out of control of her external surroundings: “Flesh and bones, giving in/I can’t see the fog I’m in/But it’s there, in my eyes/In my car, in the sky” and then she calls out over and over “I’m a wasted girl/ And I don’t know how.” The melody is catchy, the insistent lyrics sticking in the listener’s head so that we just as wild and out of control.

Creevy goes deeper inward for a couple songs; in Self Explained she sings “I am alone a lot/ I see this as my weakness/ I am embarrassed of my solo/ I don’t know why I don’t want people to know how much time I spend alone” and then she goes even farther, singing frankly “I put up cinder blocks to take away the pain/ I separated from society today/ I don’t get close to anybody but my feelings.” These lyrics are at first incredibly sad; they speak to feelings of alienation, dissociation, and loneliness that are becoming more and more common with in the 21st century with the growth of technology. Many people feel this way, but it’s not always discussed openly; by writing and singing about this, Creevy is using her art to connect with others who may feel similarly, which is one of the most life-saving things about music. However, Creevy also seems to be making the point that it’s important to turn inward and become in tune with one’s emotions, even if they are painful. These lyrics are a window into Creevy’s thoughts, her anxieties, her fears, her wounds. But it doesn’t feel like she’s calling for help, it feels like she is processing through the music, and we are along for the ride.

With help from the skills of drummer Tabor Allen, bassist Devin O’Brien, and producer Carlos de la Garza, Stuffed and Ready’s sound is tight and consistent; it is one that the band will be able to play through as their entire set at a live show, and the crowd will not be disappointed. All of the songs on the album are catchy, with thrashing drums and shredding guitars, repeated lyrics that hook the listener in. Some songs have a more pop-punk feel with high energy beats as a nice juxtaposition to the weighty lyrics, and some songs have a heavier metal/grunge sound, such as Stupid Fish (Creevy screams at the end which is a delightful surprise). This sound is a slightly new direction for the band, and they execute it well. Each song calls for dancing, swaying, head-banging, and thrashing around, as if Creevy is encouraging us to dance out everything we are feeling. The album definitely has a twinge of angst, but it is in mature form; this isn’t a teenage girl singing about silly emotions, this is a woman singing about real issues that are deeply affecting her, and many of us. The album has no conclusion, because Creevy is still figuring everything out. It ends with the song Distressor in which she sings “I just want to drown in my own noise.” Let’s hope she continues to do exactly that, so that the world gets more of Cherry Glazerr’s bangin’ music.

Listen to Stuffed & Ready via spotify