Now based in Portland, Oregon, Jeffrey Silverstein seems to have found his grounding. An avid runner, music junkie and special education teacher, Silverstein’s music emits a specific type of peace many people spend their days searching for. Silverstein is not originally from the Pacific Northwest, but you wouldn’t be able to tell by listening to his debut LP, You Become The Mountain. The nine tracks are delicately crafted and seem to personify the dreamy landscapes of the upper left corner of the USA. 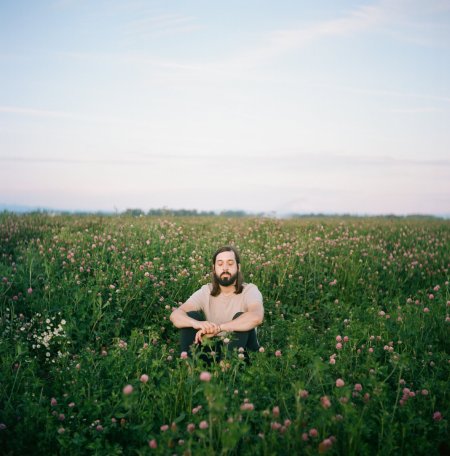 Silverstein is 1/2 of the Brooklyn folk duo Nassau. When he moved out west, he begun work on his first proper full length solo record. He quickly teamed up with Portland mainstay, Ryan Oxford (of Mama Bird Records) to begin recording at the Color Therapy in town. The minimalist sound is purposeful and detailed, yet primed for Silverstein to continue to perform as a one-man band.

Throughout the record, the soft lead guitar lines lead each song forward, but the background pedal steel and electronic drum beat possess a driving, rhythmic force that is easy to get lost in. Songs like Bernard and Cosmic Scene evoke all of the same visuals you equate to getting lost in the sight of a big mountain. Standing on a patio overlooking dewy grass, steam from a mug of hot coffee in your eyes, purple and green shadows, the remnants of snow, You Become The Mountain is the type of musical piece to plug in, get comfortable, get lost and identify whatever it is you need at the moment.

You Become The Mountain is out now on Arrowhawk Records

Listen to You Become The Mountain via spotify