Maybe its because their most catchy song features Bud Light Lime as its main subject, but Seattle’s newest band, Amy Viking is setting the tone for the summer.  They are a smooth, bluesy 4-piece with Hawaiian vibes. Perhaps the most impressive quality is the sound and production for their (literal) first few recordings. Despite the fact that no one in the band is named Amy or even female for that matter, make no mistake, they are no bar band bros. In an already very eclectic local scene, Amy Viking fits a different sonic landscape.

To now, they have been mostly jamming at house shows and a few casual gigs, but this summer they hope to make a proper Seattle splash. Though Amy Viking’s conception is still very fresh, their forming may have been years in the making. Vocalist/guitarist Max Olson and guitarist Nicolai Wallace met at a diner at the age of 14 in their native Bainbridge Island. Over the years and after a revolving roster of jam mates, the duo linked up with Sam McDonald (drums) and Sam Calhoon (bass) in Seattle to create Amy Viking and give it a go.

Old Rookie: You guys have been friends for awhile, how long have you been playing music and what made you decide to start a band, and go for it?

Amy Viking: (Max) We’ve been friends since we were 14 and basically started playing music when we became friends. Both of us picked up the guitar when we were 12 or 13. We started with a couple acoustic guitars. We formed a somewhat “acoustic/synth” band in high school with a couple friends. (laughs) yeah, good times. We played a few shows and ended up winning our local battle of the bands, which gave us a little taste of “glory”. Nico where did we go from there?

(Nicolai) Come on man.. we went our separate ways in college, but played over the summers. Once Max moved back to Seattle, we moved in with each other to a shitty basement apartment. We started playing a lot of music again down in that dungeon. We tried out a lot of drummers and bassists and eventually found a great match with Sam and Sam.

OR: (to Max) Most good bands have a DIY aesthetic, but as a graphic designer, you created your own logo, website and everything. Do the guys give you full artistic freedom or is mostly for convenience and a way to be creative and resourceful? 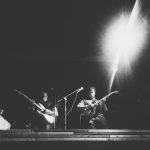 AV: (Max) The guys give me freedom, but I did design a lot of the band graphics and website out of necessity. You record a few songs and your ready to upload but you need a place to show them and some art to accompany it. As a graphic designer you can’t let things look bad so I made sure they looked good enough, but with more time I’d like to do more with the designs.

OR: There’s a song called All The Different Places that has an obvious Bud Light Lime influence.. is there a story there or is it just a fun lyric?

AV: (Max) Nicolai first wrote the foundations to the song after watching Jerry Springer. The chorus went “Bloodline, your mine”, because the episode was on who’s whose dad or something like that. It sounded like he was saying Bud Light Lime when he was showing us the song and our drummer, Sam, is a big fan of Bud Light Limes so we decided to rewrite the song about Bud Light Limes. The song started about a broken family and ended with Bud Light Limes. I think it took a turn for the better.

OR: How many shows have you played? Youre playing the Sunset on Friday and some pretty big names have played that room when through Seattle. Any special plans for the show?

AV: (Nicolai) The current full band has played a few bar and house party shows together. Yeah, the Sunset’s always been a place we’ve admired. It’s cool to think of all the names that’ve come through there. As for plans for the show, we have some theatrics… can’t say too much, but Amy will be present. And by Amy, I mean that Sam might be dressed as a woman.

OR: You are working on putting out a full LP, do you have any working details, like album name or release date?

AV: (Nicolai) Hopefully by the end of July.

AV: We’ve been focusing on recording, but we’re flushing out some details for upcoming shows. We’ll post them on our website amyviking.com when they’re ready.

Listen to Amy Viking via Soundcloud