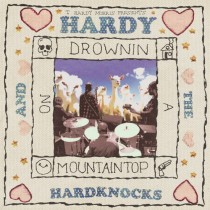 The Morris-proclaimed “crunge” genre may have started as a tongue-in-cheek way to combine “country” with well.. grunge, but it truly may be the best way to describe T. Hardy Morris & The Hardknocks new album, Drownin’ On A Mountaintop.

Perhaps the biggest influence on Morris’ style is his hometown of Athens, Georgia. A city known for its diverse music scene with rock n roll being the main export. T. Hardy Morris has the unique ability to make dark “crunge” songs sound pretty as hell. That may not necessarily be a compliment to a prolific rock n roller, but that is what you get when you take the endearing elements of those particular styles and mash them. His voice and effortless songwriting style could very well be heard on old country radio, but the garage riffs and loud, crunchy sound take you somewhere else entirely.

Drownin’ On A Mountaintop is Morris’ second go at a “solo” album. It would be fair to question when the hell Hardy writes or has time to record all the music he has been outputting in the last few years. 2013’s solo debut, Audition Tapes was somehow, seemingly conceived during the time his main band, Dead Confederate was putting out an EP and full album, In The Morrow, and that was on the heels of Diamond Rugs’ self-titled first album, where Morris was the relatively under-celebrated, but absolute songwriting equal to fellow frontmen John McCauley and Ian St. Pe (Deer Tick & Black Lips respectively).

Listen to Drownin’ On A Moutaintop on Spotify or soundcloud, but probably buy it too

Watch a live version of My Me, in Austin, Texas