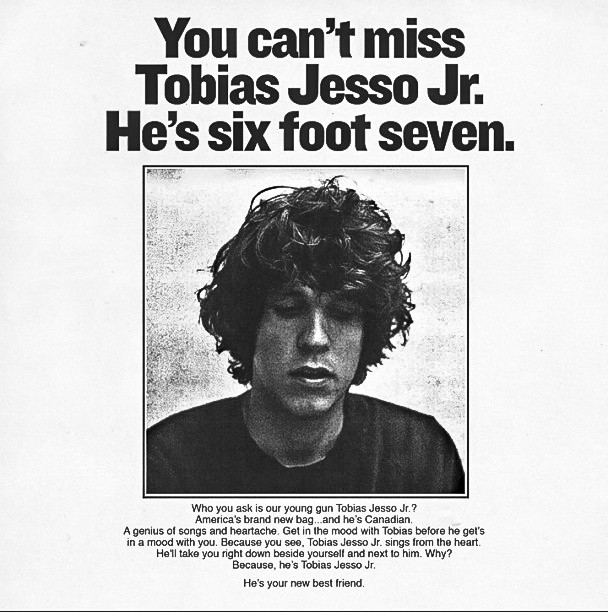 “You can’t miss Tobias Jesso Jr. He’s six foot seven,” so says the billboard in Los Angeles overlooking the liquor store on the same block he used to live next to. Regardless of height, you still can’t afford to miss Tobias Jesso Jr. His album, Goon, is something of legends. “Legends” in the likes of Harry Nilsson, John Lennon and Elton John.

The 30 year old Vancouver, Canada native spent years in LA, as a lot of people do – trying to make it in the business, playing bass and guitar with different bands – but it took going home north of the border to find his sound and stride. A string of highly unfortunate happenstances in LA all seemed to crash in on him at the same time: a girlfriend breakup, a bike crash/hit by a car, and news of his mother falling ill. (Yes, all of those things happened in a matter of days) After that, he had to get out. The 27 year old moved home, started working for a buddy’s moving company and taught himself the piano.

Just A Dream was the first song Jesso put on to youtube in a gritty demo style. Once it was tweeted out by Adele, Haim and others, there was no stopping this train.

Jesso seems like one of those cheery and goofy guys you can legitimately hang out with for a long time before realizing he’s a famous musician. Fresh off Conan, Kimmel, Jools Holland, an impromptu performance with Haim recently, it all seems to just now be the starting point for him. He even co-wrote with the new single with Adele, When We Were Young.

La Blogotheque does a great job capturing the small intimate moments in bars or outside. Their sessions with Jack White, Benjamin Booker, Lee Fields, Leon Bridges, Father John Misty, Bon Iver, Courtney Barnett are among the favorites. Watch Tobias Jesso Jr. play two album standouts in the middle of a bar with small crowd. If anything, you’ll want to go learn the piano.

Listen to Goon, in full via Spotify