Veterans of Chicago’s progressively high yielding DIY scene, guitarist Jason Balla of Ne-Hi and Earring,  bassist Emily Kempf of Vail and formerly with Lala Lala and drummer Eric McGrady complete the lo-fi roustabout trio called DEHD. Water, their chaotically freaky rumination, high off the fumes of shock record, uses the factual romantic break-up from Balla and Kempf as an opportunity to explore sensations of thanks for being granted the opportunity to feel. Trippy right? 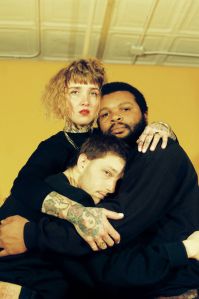 Borrowing the murmur jangle of Velvet Underground on tracks Baby and Do You,  and the psychedelic uplift of Thee Oh Sees with the selections Happy Again and Lucky, which garnered them being identified as No Wave 2k artists by Spotify in March, this third coast trio exudes an insouciant blithe charm, without need of shiny studio polish, to write and execute inventive heart-wrenching art. By purposely avoiding “Blamey Gamey” break-up album tropes, found on Rumors by The MAC and Here My Dear from Marvin Gaye, DEHD turns their 13 songs into a backasswards, unrefined, “we jam econo” forward moving shark.

Water, whose songs extend past three minutes only twice, reflects the skin and bone of emotions, by choosing to dance in the magic of the afflicted. Downtrodden. The fucked. It’s a sleight of hand trick, talking from the perspective of being face down in the gutter, smiling, unaware of the emotional head/body combo you just got tuned up with. Balla and Kempf “Frankenstein” their magical realism of the moment together, their own personal truths, and extract different types of light from underexplored sources of energy. To explain the about-face complacency and shazbot wit describing relationships coming to a close, just really hear the chorus of Lucky-the main sentiment running through Water-“This is the end/ Sha-la-la-la-la/ Oh-Oh”. For the benefit of great art, the kids have moved on.

Water is not the comedown, it’s breaking through the after-wave, coming up for air.

Water is out now on Fire Talk Records

Listen to Water via spotify

Watch the video for Lucky

Watch the video for Happy Again