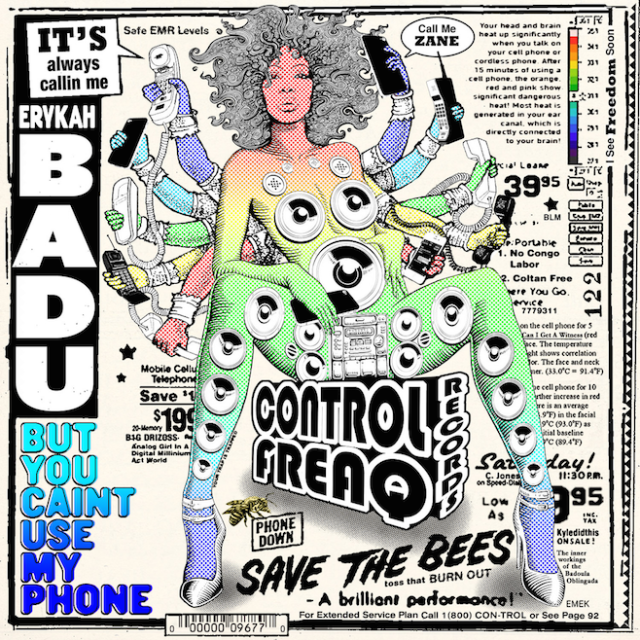 When Erykah Badu announced a new mixtape over Thanksgiving weekend, she promised a whole new frequency for her fans. All we knew was that each song had a cellphone theme to it, and her version of the mega-viral Drake cut, Hotline Bling was on it.

Now that we’ve had a week to digest it, the 36 minute mixtape is 11 tracks of some fully realized songs, some sketches, interludes and remixes of other famous songs, but is a cohesive piece that is fun listening all the way through.

Though 11 songs about cellphones may seem overkill or daunting to listen to, it’s absolutely not. But You Caint Use My Phone, drawing from modern culture that EVERYONE can relate to: people’s obsessive attachment to their phones.

Usher‘s U Don’t Have To Call, New Edition’s Mr. Telephone Man, Isley Brothers, and of course, Drake all make sonic appearances if you listen close. Andre 3000 makes a personal appearance on perhaps the biggest standout, Hello. No, it is not an Adele cover, but it’s a beautifully sung song with a similar theme. Andre 3000 raps about putting your phone down, trusting those you love and opening up to more important things in life. Andre, come back, man!

In her 1997 hit, Tyrone, Badu famously and directly sings, “you can call Tyrone, but you can’t use my phone.” The references in her new mixtape are noticeable all over the place and if people knew how much phones would be a part of daily life, the song would ring even more true today. (“You can call Tyrone but you can’t tweet/text/facetime/snapchat/Instagram creep..” ). Perhaps that’s the reason why Erykah felt she needed to bring it back to life in an updated format and rhythm, although its unlikely we will ever find out.

Badu has an aura about her with musicians, fans and media that plays as a mythical creature. She is a symbol for individuality, spirituality and artform – always in on her own joke. People are inspired by her in ways that simply do not exist with most artists. Everything she does has a purpose. That purpose is to give ART its full justice and provide a message that illicits conversation among its listeners and viewers. True with every project, music or otherwise, But You Caint Use My Phone is unlike anything Erykah Badu has done previously. With roots in soul, funk, hiphop, the new frequency Badu is speaking of is trippy, experimental hip hop bass lines that are fresh on the ears.

It’s easy to hate on smart phones when you’re being ignored across a table from your friend at dinner, but when you’re listening to But You Caint Use My Phone on your iPhone between swiping, you can wallow in irony and feel good about it. Erykah Badu can make you put your “Phone Down.”

You can stream it on Spotify as of today. Previously it has only been on Apple Music and iTunes. Charge your phones.

But You Caint Use My Phone